Custom object formatters give developers control over how objects appear in the debugger and console.

This is useful when working with libraries that wrap around a simpler data structure. For example, Immutable.JS Records or Backbone Models could both be logged as plain objects instead of their more complex representations.

Chrome currently doesn’t have custom formatters enabled by default. You need to enter the DevTools settings via the menu at the top right of the DevTools panel. 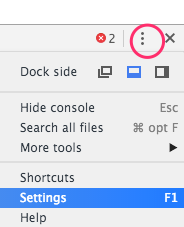 Then select “General” and enable custom formatters in the “Console” section. 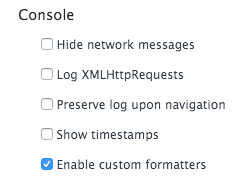 DevTools will now use custom formatters when displaying an object.

Chrome looks for custom formatters in the window.devtoolsFormatters array. This array doesn’t exist by default, so we need to create it.

The formatter itself is an object with up to three functions: header, hasBody and body.

In this example, we only want to show a static summary of the object.

Now, if you type a = {} into the console Chrome will log the value as [object Object].`

Chrome passes the object into the header function of our formatter. It returns a JsonML [tag-name, attributes, element-list] tuple that is then converted into a DOM element.

element-list represents the content of the DOM element. In this case, it’s simply a string, but it could also be another JsonML element.

We don’t let the user expand the logged object, so our hasBody function returns false.

Another example: writing a formatter for Backbone.Model

The actual model data is hidden inside the attributes property. The following formatter can make the data easier to see:

The model now shows up in the console like this:

However, all objects that aren’t Backbone models now show up as null:

We can fix this by returning null from the header function if the object isn’t a Backbone Model. Chrome will then not use the custom formatter and instead fall back to the default representation of the object.

Let’s extend out formatter so we can expand the object tree.

This is the model we’re logging:

And this is how it’s going to appear in the console.

To achieve this we need to tweak the header function and add a body function to the object.

We also need to change the hasBody function to return true. This will make an arrow appear that lets the user expand the object. When the user clicks on the arrow the body function is called.

This is the full code, except for support for indentation of nested objects.

Let’s try and make sense of the body function. The first time body is called, obj will be the Backbone model and config will be undefined.

We then create a child element for each property in the model’s attributes.

There are three kinds of child elements:

If the child element is a string it will simply be used as the content of the HTML tag.

DOM elements work just like they did in the previous example. If the property value isn’t an object we display the property name and value.

Child Objects are more interesting. They allow the user to gradually go deeper into the object tree.

Before the Child Object is expanded the object is displayed using the header function. This if statement inside header handles that case:

The Child Object’s config property is optional, but it lets us pass in additional data the we need to render the object’s representation. In this case, we use it to pass in the backboneModelFormatter and key properties.

When the user clicks on the header representation Chrome calls the body function to expand it. We treat it just like the Backbone model, so any properties that are objects can again be expanded.

This Gist shows the complete formatter code, including support for indenting nested objects.

Our formatter now correctly outputs the content of the Backbone Model.

In addition to the console, Chrome also uses custom formatters when hovering over variable names in the source code, and in the Watch and Scope panels.