How is node --inspect different from using Node Inspector?

The developers working on Chrome at Google recently opened a pull request on the Node project to “add v8_inspector support”.

There are already a bunch of Node debugging tools out there. Many of them re-use the DevTools frontend code for their UI. However, behind the scenes they work differently from the normal DevTools.

This post explains how Node Inspector works and how the new node --inspect command is different. 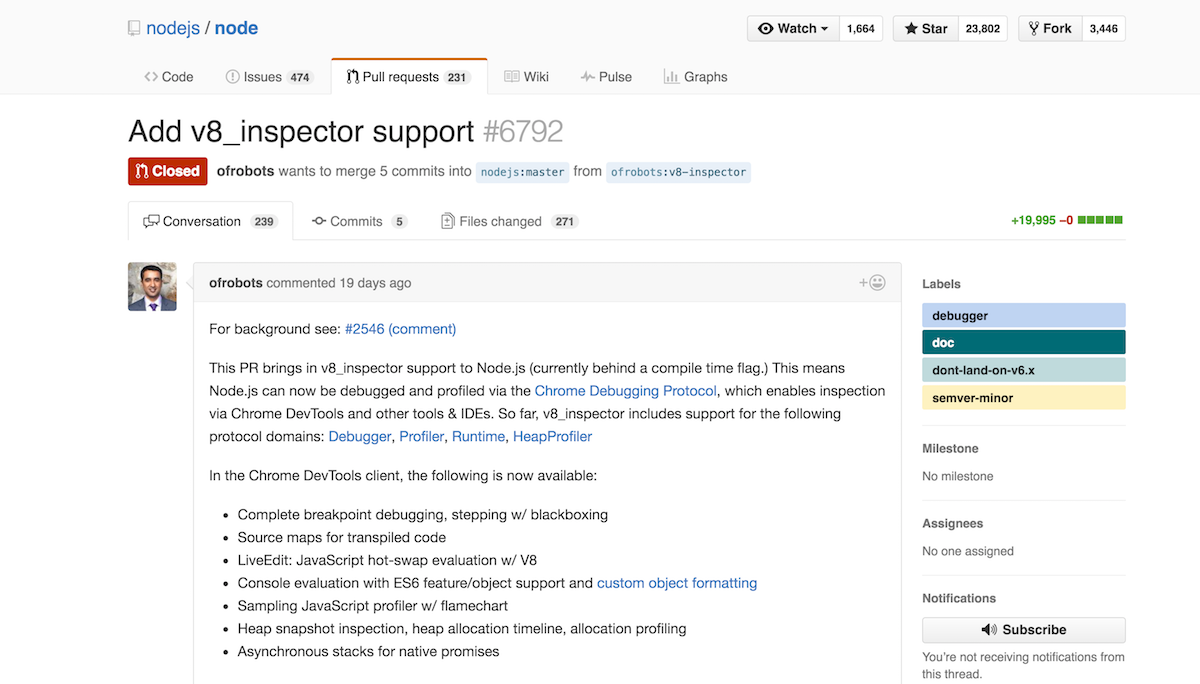 Node already ships with an integrated debugger. However, it doesn’t have a GUI, so you need to use the command line version.

You can launch this debugger using node debug.

It shows you where it’s paused and then lets you control execution with commands like next and cont.

The repl and watch commands allow you to see the values of local variables.

What does Node Inspector do?

Node Inspector allows you to use the DevTools user interface with the native Node debugger.

However, there’s one problem: The native Node debugger uses a protocol called V8-Debug, while DevTools uses the Chrome Debugging Protocol.

That means Node Inspector has to step between the two and translate.

Connecting to the Node process

If passed the --debug option the Node process will expose the debugger connection on a port, rather than directly on the command line.

That means a different process can connect to it.

This is what Node Inspector does. When you interact with the DevTools UI it has to send V8-Debug commands to the Node process, rather than Chrome Debugging Protocol commands.

What does adding v8_inspector support to Node do?

v8_inspector is “is an implementation of the DevTools debug protocol”. That means DevTools can now connect directly to the Node process!

It’s still being decided whether the --inspect command will be added to Node v6 or if it will only become available with v7.

I'm building monitoring tool for Lighthouse scores and Core Web Vitals. Give it a try!
➔ Start moniting your website