When inspecting a page with FromJS you can find the JavaScript code that’s responsible for a particular part of the UI. This article explains how that works.

We’ll take a look at this example. If you’re on Chrome Desktop you can try it online.

Inspecting the final body HTML leads us back to the source code:

Step 1: What are we looking at?

The user has selected an element from the DOM. Its outerHTML looks like this, and the “H” in “Hello World!” is selected.

The outerHTML came about as the combination of two events:

Since the user clicked on the “H” character in the tag content it’s straightforward which event we’ll need to look at in more detail: the innerHTML assignment.

Step 2: Finding out where the innerHTML value was set

To track where in the code the innerHTML assignment happened we need to run some code every time innerHTML is updated.

This is possible by adding a property setter to the innerHTML property of Element.prototype.

Now, the downside is that we are no longer actually updating the innerHTML of our element, because we overwrote the original setter function that did that.

We want to call this native setter function in addition to running our tracking code. The details of a property - such as its getter, setter, or whether it’s enumerable - are stored in something called a property descriptor. We can obtain the descriptor of a property using Object.getOwnPropertyDescriptor.

Once we have the original property descriptor we can call the old setter code in the new setter. This will restore the ability to update the DOM by assigning to innerHTML.

Now, in the setter we want to record some metadata about the assignment. We put that data into an __innerHTMLOrigin property that we store on the DOM element.

Most importantly, we want to capture a stack trace so we know where the assignment happened. We can obtain a stack trace by creating a new Error object.

Let’s run the “Hello World!” example code from earlier after overwriting the setter. We can now inspect the #welcome element and see where its innerHTML property is assigned:

We now have a starting point in our quest to find the origin of the “H” character in the #example div. The __innerHTMLOrigin object above will be the first step in on this journey back to the “Hello” string declaration.

The __innerHTMLOrigin object keeps track of the HTML that was assigned. It’s actually an array of inputValues - we’ll see why later.

Unfortunately, the assigned value is a plain string that doesn’t contain any metadata telling us where the string came from. Let’s change that!

This is a bit trickier than tracking the HTML assignments. We could try overriding the constructor of the String object, but unfortunately that constructor is only called when we explicitly run new String("abc").

To capture a call stack when the string is created we need to make changes to the source code before running it.

Babel is usually used to compile ES 2015 code into ES5 code, but you can also write your own Babel plugins that contain custom code transformation rules.

Strings aren’t objects, so you can’t store metadata on them. Therefore, instead of creating a string literal we want to wrap each string in an object.

Rather than running the original code:

We replace every string literal with an object:

You can see that the object has the same structure we used to track the innerHTML assignment.

We do something similar for string concatenation.

After this, the value of greeting is as follows:

greeting is then assigned to our element’s innerHTML property. __innerHTMLOrigin.inputValues now stores a tracked string that tells us where it came from.

We can now track the character “H” character in “Hello World!” from the innerHTML assignment back to the JavaScript string literal.

Starting from the div’s __innerHTMLOrigin we navigate through the metadata objects until we find the string literal. We do that by recursively looking at the inputValues, until inputValues is an empty array.

Our first step is the innerHTML assignment. It has only one inputValue - the greeting value shown above. The next step must therefore be the greeting += " World!" string concatenation.

The object returned by f__add has two input values, “Hello” and “ World!”. We need to figure out which of them contains the “H” character, that is, the character at index 0 in the string “Hello World!”.

This is not actually difficult. “Hello” has 5 characters, so the indices 0-4 in the concatenated string come from “Hello”. Everything after index 4 comes from the “ World!” string literal.

The inputValues array of our object is now empty, which means we’ve reached the final step in our origin path. This is what it looks like in FromJS: 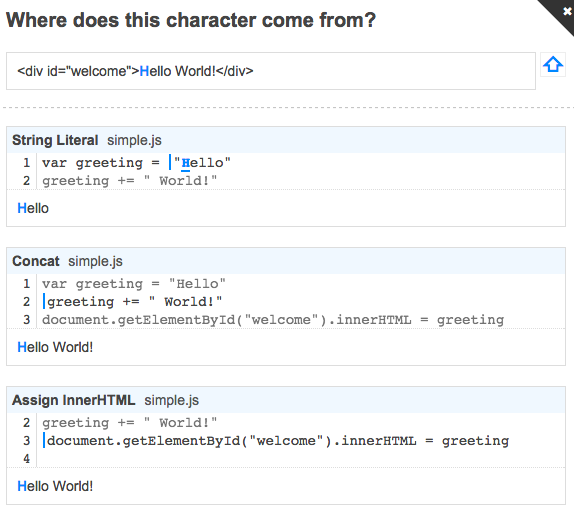 How do the string wrapper objects interact with native code?

If you actually tried running the code above, you’d notice that it breaks the innerHTML assignment. When we call the native innerHTML setter, rather than setting the content to the original string, it’s set to “[object Object]”.

That’s because innerHTML needs a string and all Chrome has is an object, so it converts the object into a string.

The solution is to add a toString method to our object. Something like this:

When we assign an object to the innerHTML property, Chrome calls toString on that objects and assigns the result.

Now when we call code that’s unaware of our string wrappers the calls will still (mostly) work.

I won’t go into too much detail about this, but the example below should give you a basic idea of how this works.

Babel allows you to specify “visitors” for certain types in the JavaScript parse tree. The function below is called for every string literal that Babel finds in the source code.