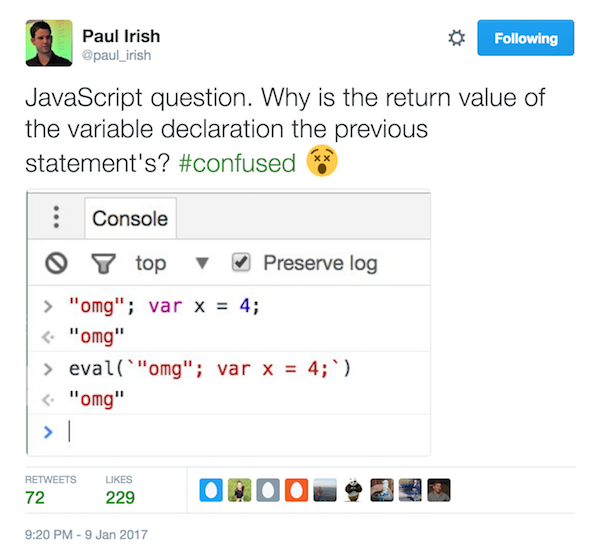 Instead of "omg" you’d expect the resulting value to be undefined, since that’s what var x = 4 evaluates to.

Brendan Eich, the creator of JavaScript, answered the question:

But why does it matter that it’s a statement completion value rather than a return value?

What is a statement completion value?

Intuitvely, a statement completion value is what you get when evaluating a chunk of code, for example in the console:

In practice, the only way to access a statement completion value within JavaScript is through the return value of an eval call: 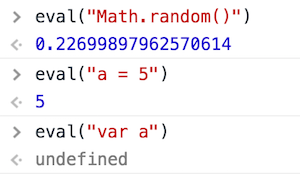 In addition to normal JavaScript values the Completion type is able to store an empty value. For example, variable statements complete with empty. But empty isn’t part of the JavaScript language, so eval("var a") returns undefined instead of empty.

To understand the code at the top of the post we need to look at how statement lists handle this special empty type.

How do statement lists behave?

This is what the spec says about the completion value of a list of statements:

eval("1;;;;;") consists of an expression statement (1;) and 4 empty statements (;;;;). Empty statements complete with (big surprise) empty. That means 1; is the only statement that produces a non-empty value. Therefore it’s also the last value producing item and the statement list completes with the value 1.

In the second example from the spec it may look like it should return an empty object. However, the {} actually represents an empty block statement, which also completes with empty.

Finally, the last example is very similar to what we saw at the top of the post.

"omg"; var x = 4; is a statement list with two statements. Since the completion values are "omg" and empty, the code evaluates to "omg" as the last non-empty value.

ES2015 has changed the completion values of some statements. Here’s an example comparing current Chrome and Firefox.

Firefox follows ES5 rules where the completion value of an if statement with a falsy condition is empty. That makes "Hi" is the last non-empty value.

However, this behavior has changed and if statements in ES2015 always complete with undefined if their condition is falsy. As the screenshot shows, Chrome seems to have implemented this change.

Here’s some more background on completion changes in ES2015.