This post will explain lazy parsing, how it’s beneficial, and what the potential problems with it are.

Before JavaScript can be run it needs to be translated into machine code. That’s what V8 does.

First, the code is converted to a list of tokens, then the tokens are converted into a syntax tree, and then machine code is generated from the sytnax tree.

Parsing is the second step – converting the tokens to an abstract syntax tree (AST). Here’s some example source code with the corresponding AST: 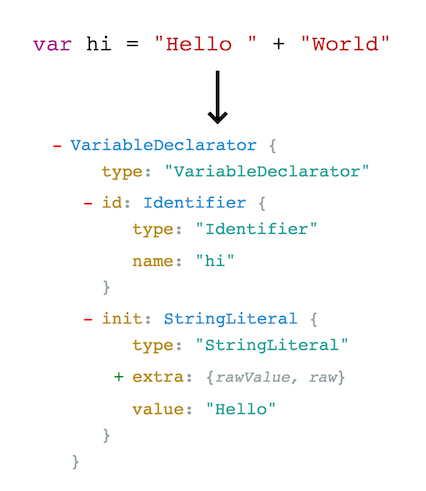 If you’re interested in playing around with JavaScript syntax trees try out AST Explorer.

That’s possible because most functions in a JavaScript file are never actually called, or won’t be called until later on, for example when the user interacts with the UI.

So instead of parsing every function most functions are just pre-parsed. Pre-parsing detects syntax errors, but it won’t resolve the scope of variables used in the function or generate an AST.

By doing less work the pre-parser is about two times faster than the full parser.

However, when you call a function that hasn’t been fully parsed yet you need to do a full parse at the time of the function call.

Let’s look at an example of this behavior.

Node has a command-line option called --trace_parse that will tell you when scripts or functions are parsed. However, the output can sometimes be quite large because of various internal code that Node runs to bootstrap your program. So instead of Node I’ll be using the V8 shell called d8.

Unlike Node, d8 doesn’t have a console.log function, so I’m using a function called print:

There’s still some d8 related output, but much less than if we were using Node. The last three lines are what matters.

When test.js is initially parsed the sayHi and add functions are only pre-parsed, making the intial script parse faster.

Then, when we call sayHi, the function is parsed fully.

Importantly add is never parsed fully. That both saves the parser time and reduces the memory consumption of V8.

If we append add(1, 2) to our JavaScript code add will be parsed at the time of the function call:

What’s the problem with lazy parsing?

Let’s remove the unused add functions from the code above.

First V8 pre-parses sayHi, immediately followed by a full parse. The pre-parse is unnecessary, and our program would run faster without V8’s optimization attempts!

Ideally functions that are called right when the JS file is loaded should always be fully parsed, while for other functions pre-parsing is sufficient.

There is actually a heuristic in V8 where functions wrapped in parentheses are always fully parsed. For example, this applies to immediately invoked function expressions (IIFEs):

Now let’s say we want our sayHi example to run quicker. What can we do?

First, let’s store sayHi as a variable rather than using a function declaration:

V8 is still pre-parsing sayHi, but we can prevent that by wrapping the function expression in parentheses.

Even though it’s not an IIFE V8 will apply it’s heuristic to do a full parse from the start:

Rather than manually making these optimizations and making our code harder to read we can use a tool called optimize-js.

In practice a common cause of unnecessary pre-parses is that the minifier UglifyJS removes the parentheses from IIFEs to save bytes:

That doesn’t change the behavior of the code, but it does break Chrome’s heuristic.

If you run optimize-js on the minified code above the parenthesis are restored:

Incidentally, the optimize-js readme points out that Chakra, the JS engine used in Edge, is able to correctly detect the !function(){}() IIFE syntax and prevent pre-parsing.

Are these optimizations worth the effort?

optimize-js has a few benchmarks showing impressive speedups around 20%. However, in Chrome on my laptop the actual improvement for a sample React app is only 6ms (script load time goes down from 24ms to 18ms).

The speedup will be more meaningful on slower devices. But not on iPhones: Safari’s JavaScriptCore engine shows no improvement for the optimized script.

Most likely there are more impactful things you can do to improve your websites’s performance. But if you’ve run out of ideas it’s worth giving optimize-js a try and measue if there’s a meaningful improvment.