Implementing a hash table in JavaScript

To get a better understanding of how they work I started building my own data structure to store key-value pairs and then tried to optimize it for performance.

If you’ve got the time, consider trying to come up with your own solutions before reading on.

Hash tables can be used to implement associative arrays (also called dictionaries). This is how our hash table will work:

Let’s start with a very naive implementation of a dictionary. We’ll actually end up using this in our hash table later on too.

NaiveDict does everything we set out to do, but it’s very slow. We may need to iterate through every item in the table, so worst-case performance is O(n).

At the core of a hash table is an array of roughly similar size to the number of key-value pairs stored in the hash table.

The key of a key-value pair decides what bucket it should be stored in. First, the key is converted to a number using a hash function:

We want to use the hash as an index in our array of buckets. But what if we only have 1000 buckets, and the hash value exceeds the array size?

To solve that problem we use the modulo operator to get an index that’s smaller than our array size.

Sometimes the hash function will return the same hash for the same key – that’s called a collision.

Because collisions are possible we need a second level of storage in each bucket. In this example we’ll use the NaiveDict class from above.

When initializing the hash table we create an array containing a fixed number of these buckets.

More complex hash table implementations will resize the table dynamically based on the number of items they store.

We need to decide how our hash function should work. For now, let’s use a very simple implementation that takes the sum of the ASCII codes of the characters in the key.

To determine the correct bucket given a certain key we use the modulo operator on the hash of the key, then retrieve the bucket at the index we just calculated.

Finally, we implement the get and set functions. Each bucket contains a NaiveDict, so we can insert or look up the key there.

We’ve got a working hash table!

Let’s see how well our hash table is doing.

This test generates 100,000 keys and values, then measures how long it takes to insert (SET) and then read (GET) them from the hash table.

I took the makeid function from StackOverflow.

Result on my machine:

I also tried wrapping a native JavaScript object with a get and set function:

Let’s see if we can get the performance of our hash table closer to that.

I mentioned earlier that, ideally, the hash function should uniformly distribute keys to buckets. But here’s what our hash function does: 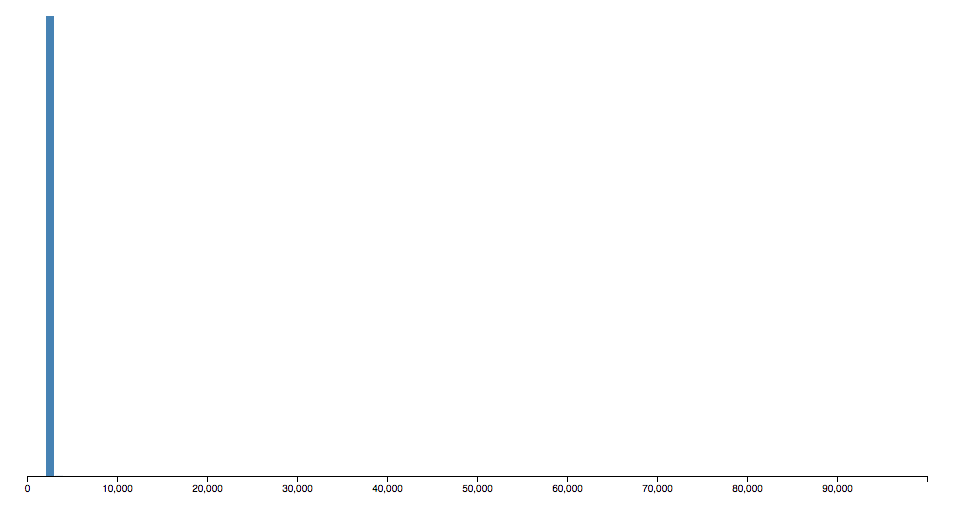 Only a few hundred buckets are actually used.

The current hash function treats every character equally, but let’s change it to take the position of the character into account:

Now a bit over 10 thousand buckets are used:

And we get better performance:

Still, it’s not a perfectly uniform distribution. I’m too lazy to think about how to achieve that, but conveniently Mark Wilbur already wrote a blog post about hash tables in JavaScript, and this is the hash function he uses:

Which uses most of the buckets we’ve allocated! 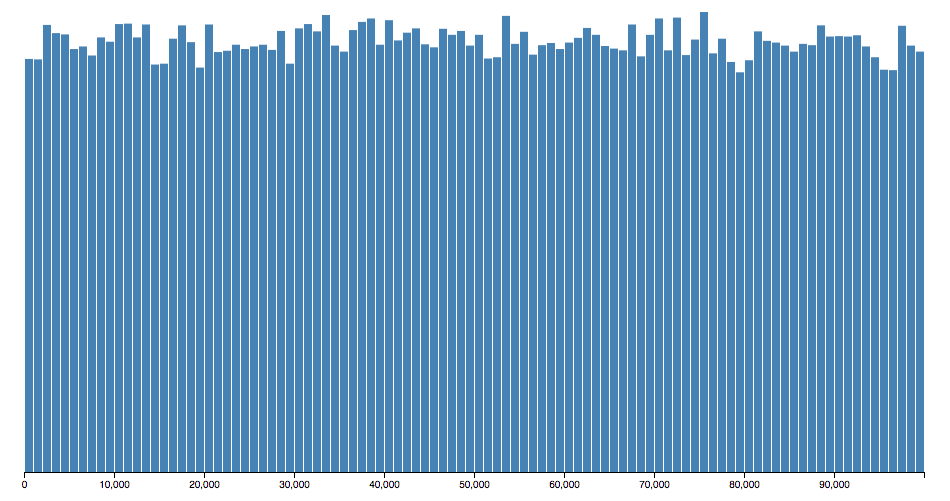 However, this hash function is also more complicated and takes more time to run. That makes inserting the key-value pairs take longer. But because we have fewer collisions retrieval becomes faster, despite the increase in time spent on hashing.

More things we could do better

While our CPU performance is pretty good there’s still a lot of room to save on memory. For example, even buckets that contain no items currently use up memory (two empty lists in NaiveDict).

Also, in practice the individual buckets often use linked lists rather than our NaiveDict. I’m not sure that would do much for performance, but it might reduce memory consumption as normal JavaScript lists may take up more memory than necessary in order to be able to grow, while linked lists can be more efficient.

While we can retrieve the correct bucket in constant time (O(1)), the complexity of retrieving the value from NaiveDict is still O(n).

However, now our n is much smaller. In fact, if our hashes were perfectly distributed and there are no collisions each NaiveDict would only contain one item. Thus, in the best case O(n) becomes O(1)!.