There are lots of little costs I didn’t consider when starting out. It’s often difficult to figure out when and why a given amount of resources was used. In this post I try to understand and break down my bill.

This chart shows the breakdown by product: 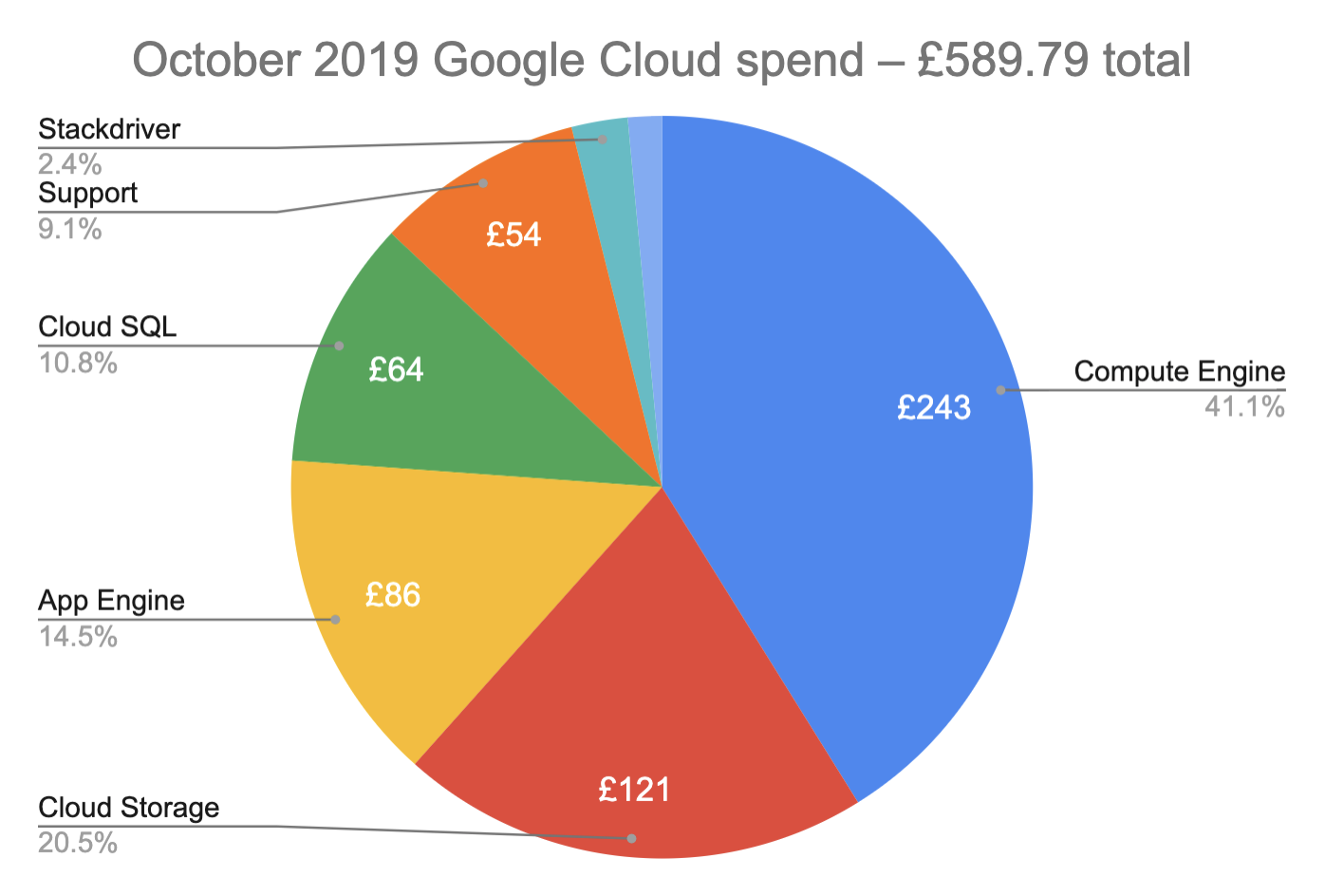 Here’s some more info on what each product is used for:

I’ll break down each the costs for each product by individual billed resource (SKU) and try to explain the amount of resource usage and the billed amount.

The costs here are all pretty expected, most of it paying for the actual server instances I’m using.

My VMs use a custom machine type instead of the predefined ones like n1-standard-2, so I’m billed for the number of hours of “Custom Instance Core” and “Custom Instance Ram” used. These are charged in 1 second increments. 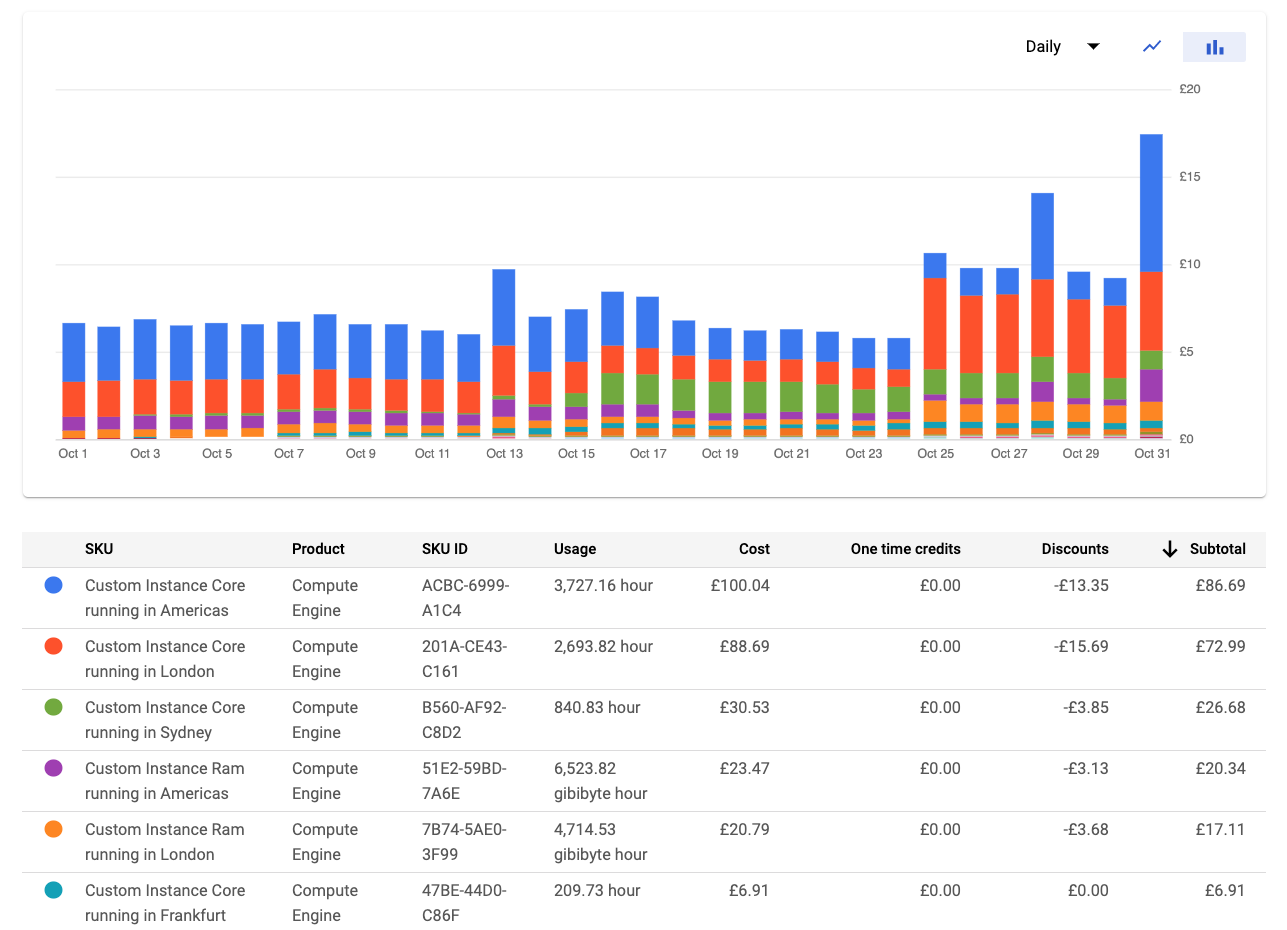 You can see that I onboarded a new UK based customer on the 25th of October. There are also occasional spikes in US usage for one-off projects.

The main complexity for Compute Engine billing comes from Sustained Use Discounts.

The maximum discount you can reach is 30%. If you use a resource for less than 25% of the month you’ll get no discount.

The discount is applied for using a consistent amount of resources, not identical ones. If you shut down one VM and then create a new one this will be billed the same as if you had kept using the first VM.

For me, the usage pattern for how many cores I use looks something like this. (I took the screenshot from the GCE VM Instance metric in Stackdriver.) 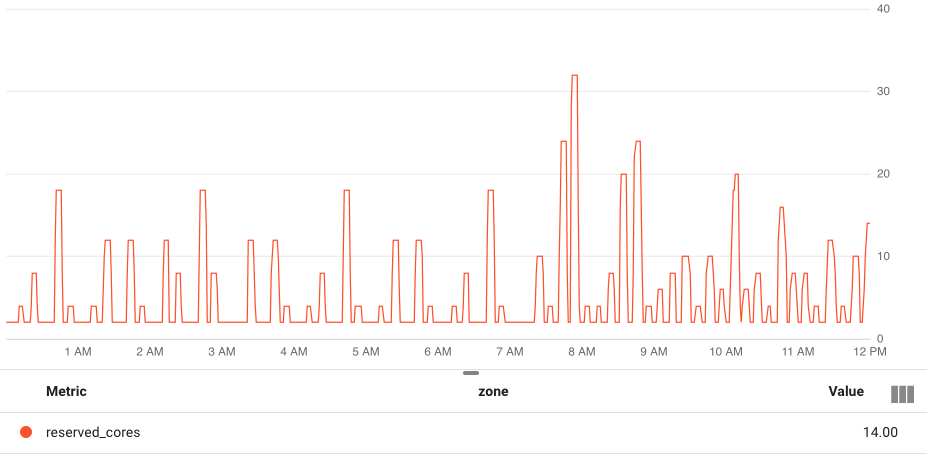 Rather than using a consistent number of CPUs the usage pattern is dominated by occasional spikes with a large number of CPUs. Because of that no sustained use discount is applied.

However, I also keep one machine with two CPUs running continuously, and I receive a 30% discount on that usage.

This means you can generally expect your post-discount Cloud Storage costs to jump up at the beginning of the month.

I also paid £0.93 for the disks used by the virtual machines. 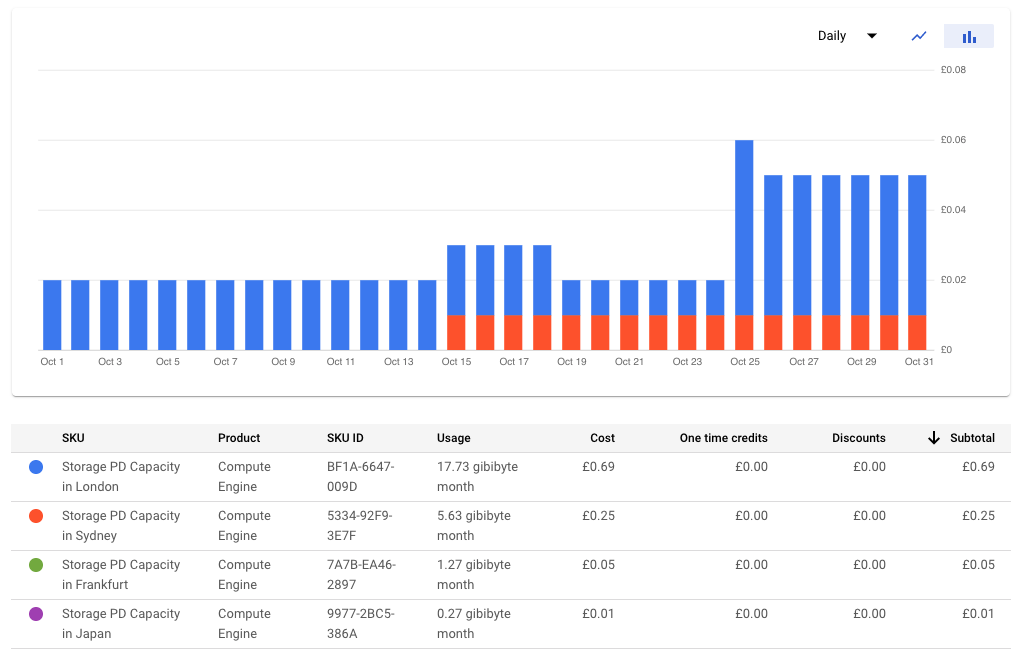 You might notice that I’m not paying anything for servers in the US. That’s because there’s a 30GB free tier that applies to some regions. Without that free tier I’d have to pay another £0.68.

I paid another £1.27 for outgoing traffic from my VMs. This can be broken down into different types of network egress. Some of these have free tiers, others don’t.

Most of my costs were for general Internet Egress. By volume, most of the traffic was within my primary Google Cloud region. 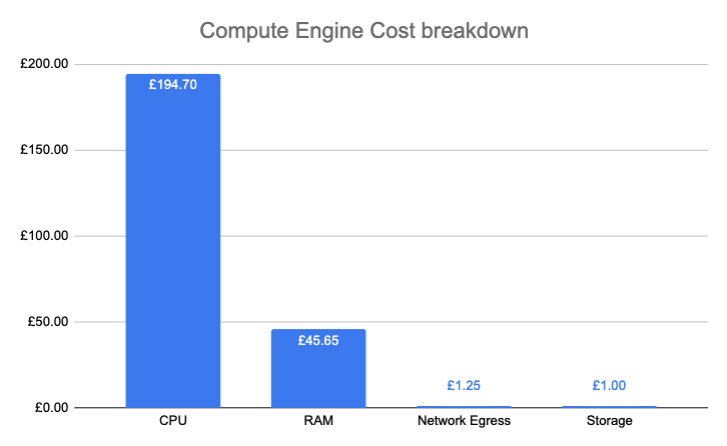 This was a big problem for me at the beginning of the month. I already wrote about this before.

In short, every time I launched a VM in the UK it downloaded the Docker image from the US and I was charged for Cloud Storage Egress between the two regions. Eventually I fixed it by hosting the Docker image in Europe. 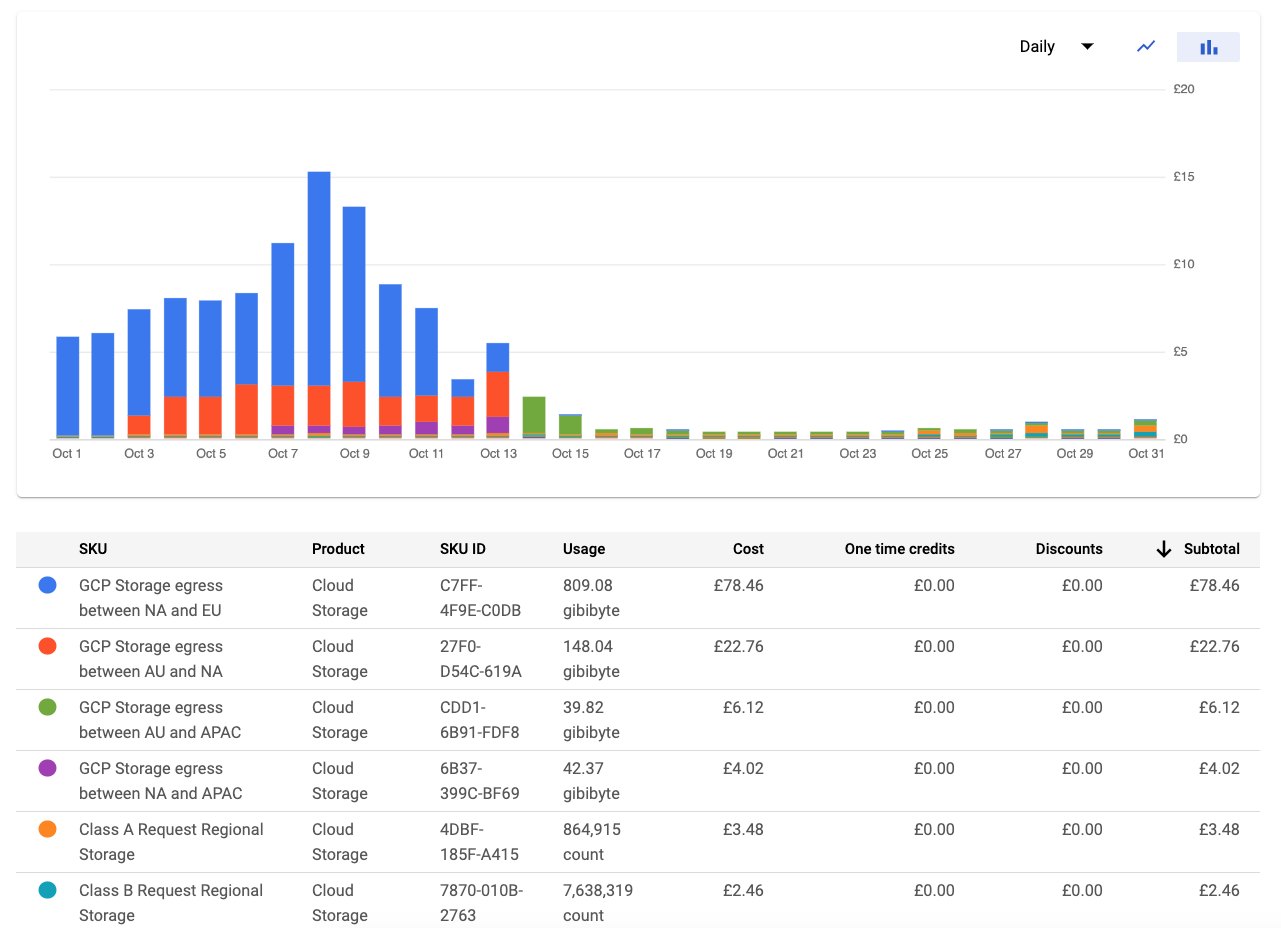 Those egress costs were causing the biggest chunk of my bill. 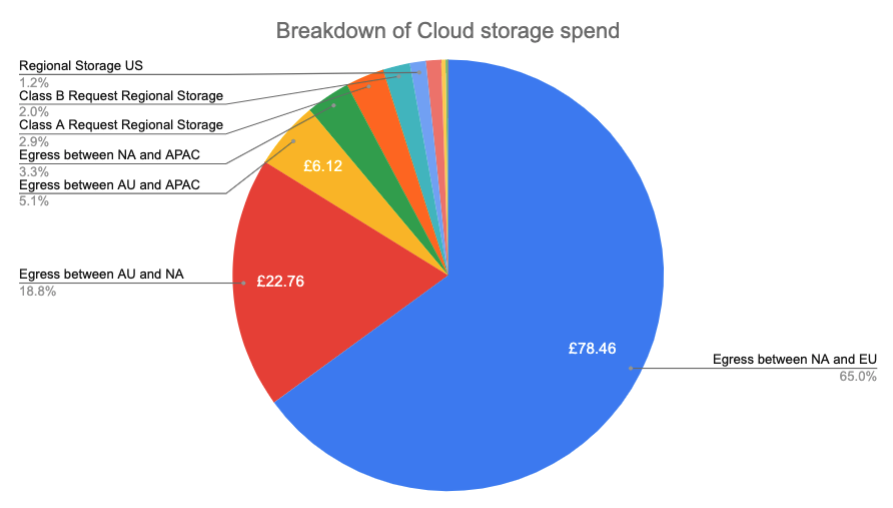 Since the large egress costs were a short-term problem, let’s just look at the second half of the month.

Cloud Storage traffic going to Australia is still a big factor. That’s because the Google Container Registry doesn’t have a location there and I still download the Docker image from the US every time I launch a new VM.

Class A and Class B operations

Class A operations are things like inserting an item into a bucket. They are about 10 times more expensive than Class B operations, such as retrieving an item from the bucket.

Class A and B operations have a free quota of 5,000 and 50,000 operations, respectively. But that free quota was already used up in the first half of the month, so I won’t include it here.

You can get a breakdown of storage usage by using the Stackdriver metric explorer and selecting “GCS Bucket -> Total bytes”. That data there is deleted after a while, so this chart only shows bucket size from October 7 onwards.

This is for hosting the user-facing website. It’s billed by the front-end instance hour. The F2 instance type I’m using uses 2 instance hours per hour on the clock. 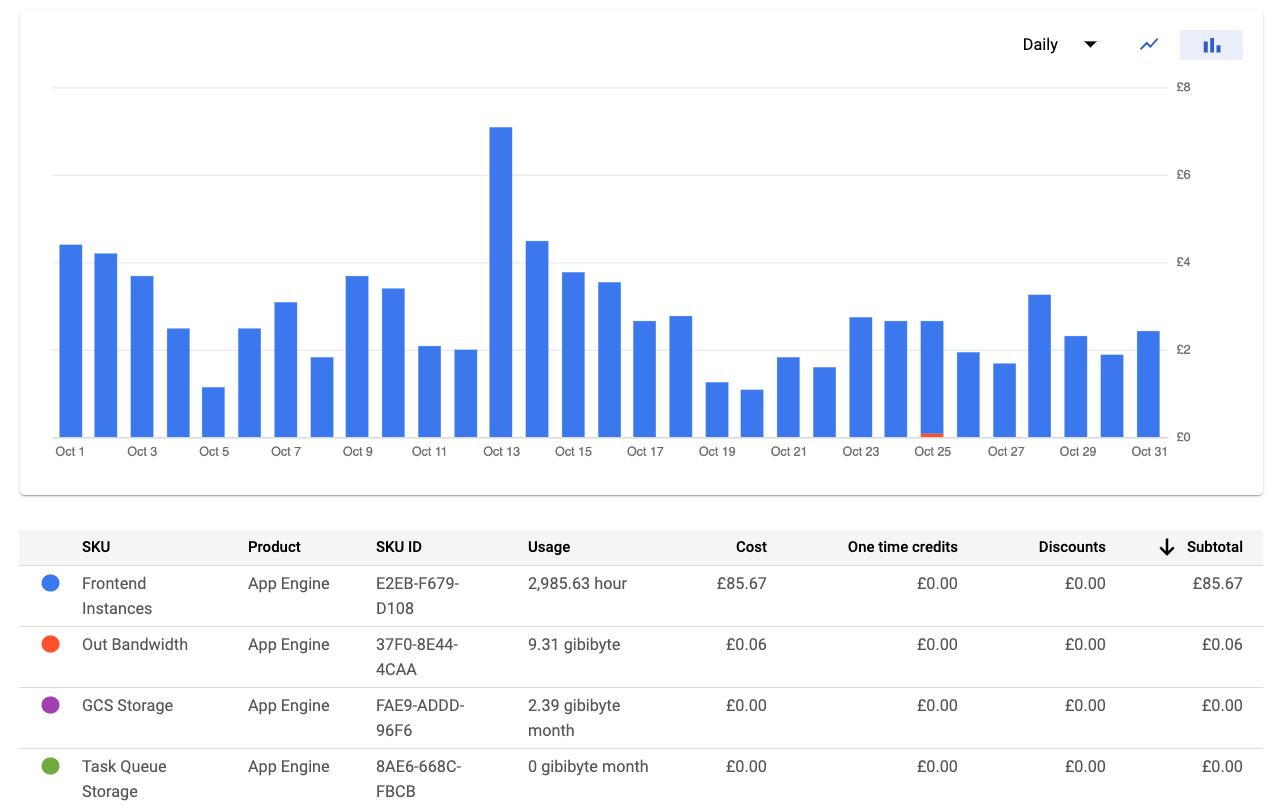 Since I use automatic scaling, App Engine costs are pretty hard to predict overall. Sometimes GCP doesn’t shut down instances that no longer serve any traffic, and not all instances are always billed for.

This Stack driver chart puts the average number of active instances at around 4. 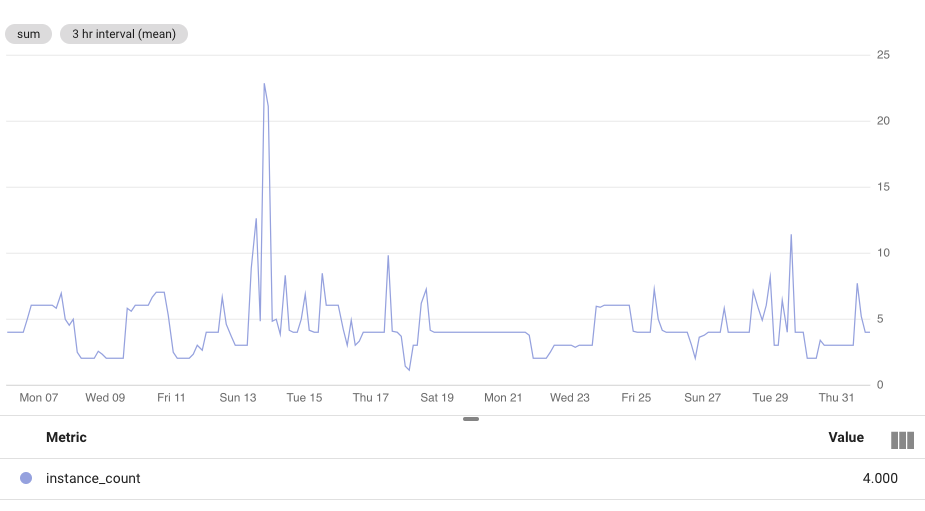 But the “Billed Instance Estimate” from the App Engine dashboard tends to be lower: 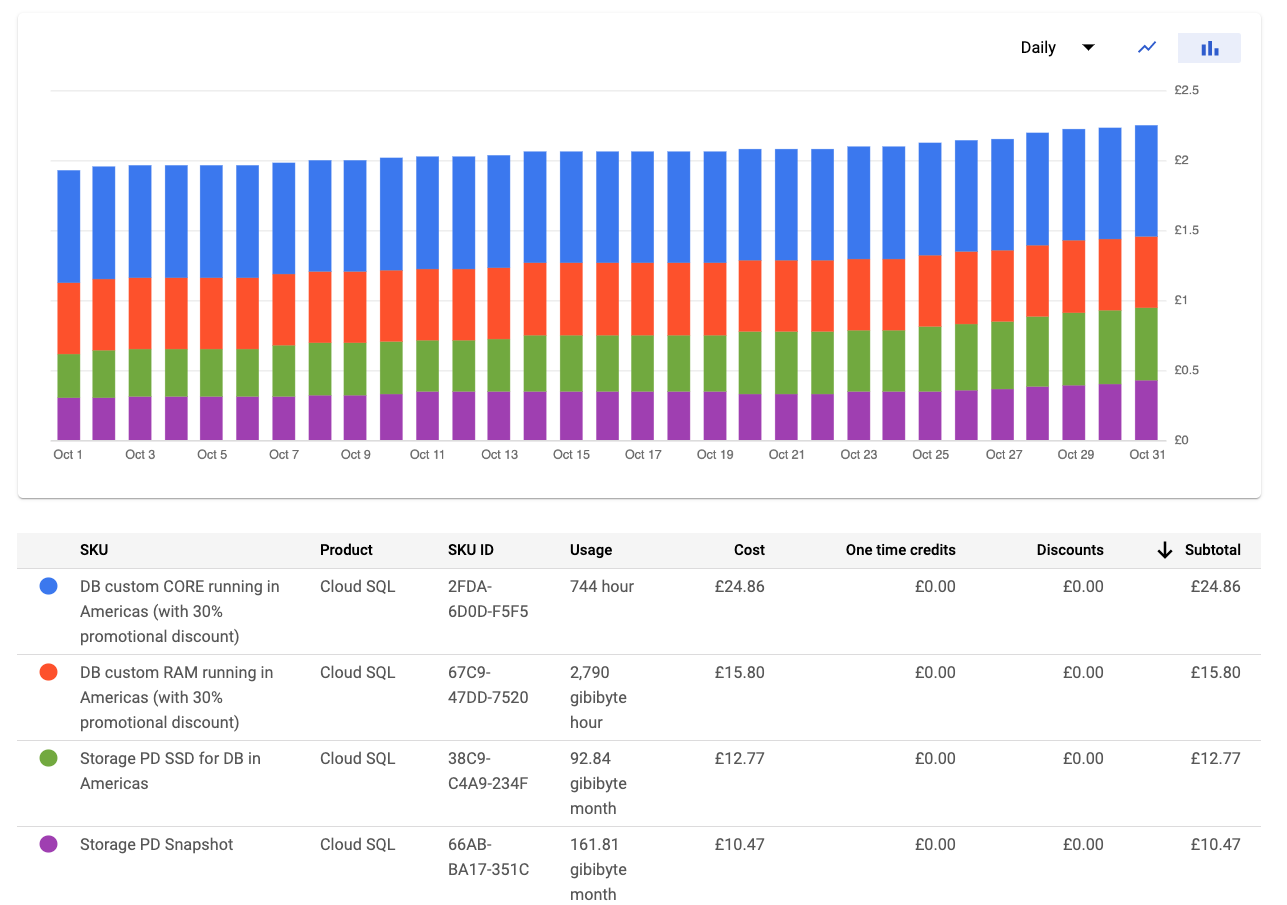 Network egress is free within a Google Cloud Platform region (Network Google Egress from Americas to Americas), so the 213.94GB of data served from the database didn’t come at an additional cost.

However, accessing the database from my local machine will incur costs for “Network Internet Egress from Americas to EMEA”. This was only 30MB though, so I didn’t pay anything.

These costs are fairly constant and predictable, since there’s only one database server running at any given time. So usage will be 31 * 24h = 744h.

You may notice that the SKU is called DB custom CORE running in Americas (with 30% promotional discount). That’s the equivalent of the maximum 30% sustained use discount.

Storage costs increase throughout the month as the amount of data stored increases. Cloud SQL automatically increases the disk size when necessary. 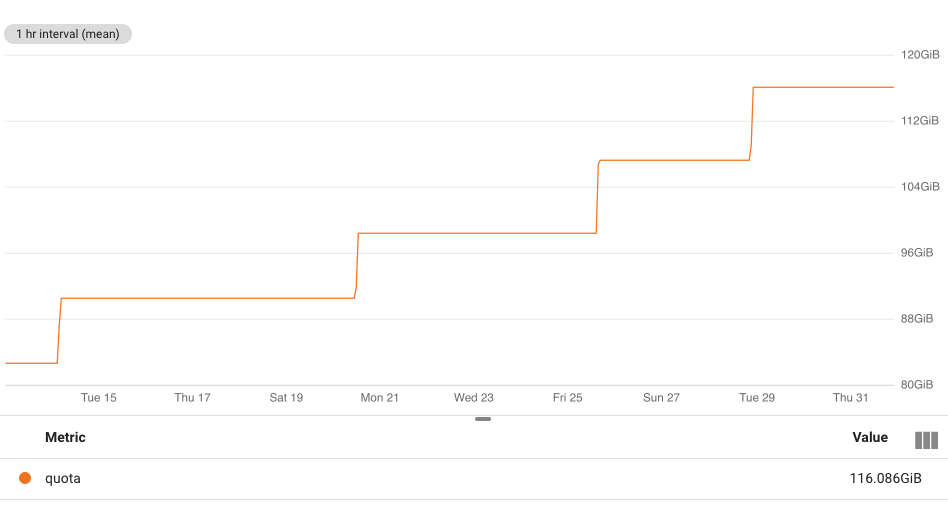 (I took this screenshot pretty late, so data from before October 14 was no longer available.)

Google does not provide technical support unless you pay extra for it, starting from $100 per user per month.

There is free support for billing issues, but if there’s a technical aspect like trying to find a breakdown for a particular SKU or explaining what an SKU includes they won’t be able to help you.

Since I kept running into various issues I decided to just start paying for support, to avoid having to figure out everything by myself. 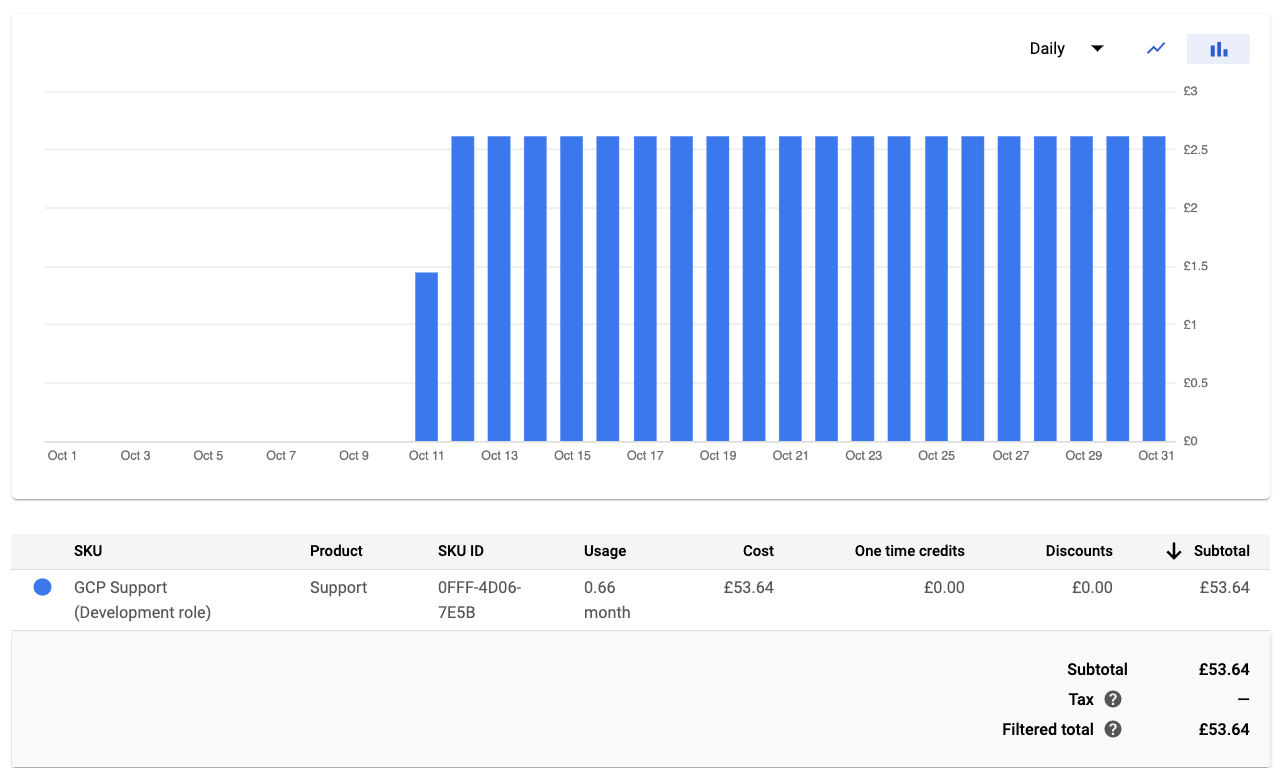 This is a great example of a cost that initially falls under the radar because of the free tier. Then as soon as you exceed the free tier you’ll notice a sharp increase in cost. 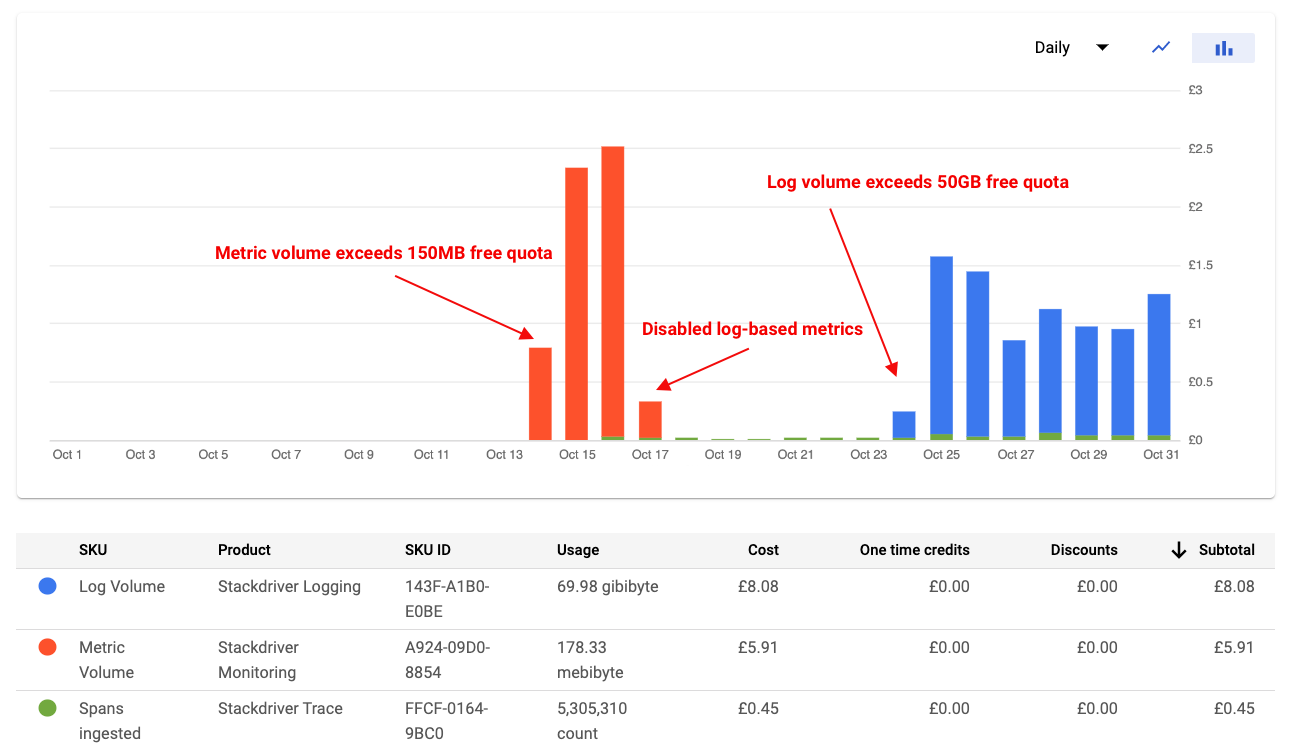 The first free tier I exceeded was for 150MB of Stackdriver Monitoring metrics. I was generating log-based metrics to monitor my website and create dashboards based on that data.

But Stackdriver custom metrics are a pain to use, so I had already started using another service to monitor the system. Therefore I could just disable the log-based metrics when I went beyond the free tier.

Most of the Stackdriver cost ultimately came from simply storing logs. Once you go over the 50GB free tier it costs $0.50 per GB!

I tried to reduce the log volume when I noticed the problem, but with limited success. 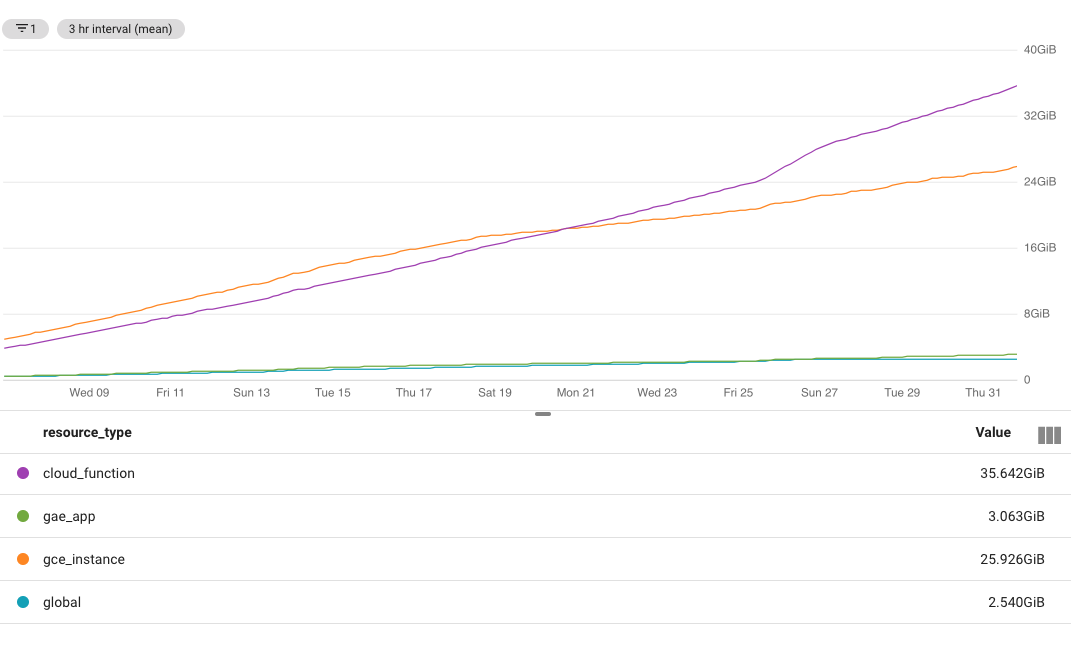 Finally, I was charged £0.45 for Stackdriver trace spans. This is latency data that breaks down what part of a request is taking a long time. 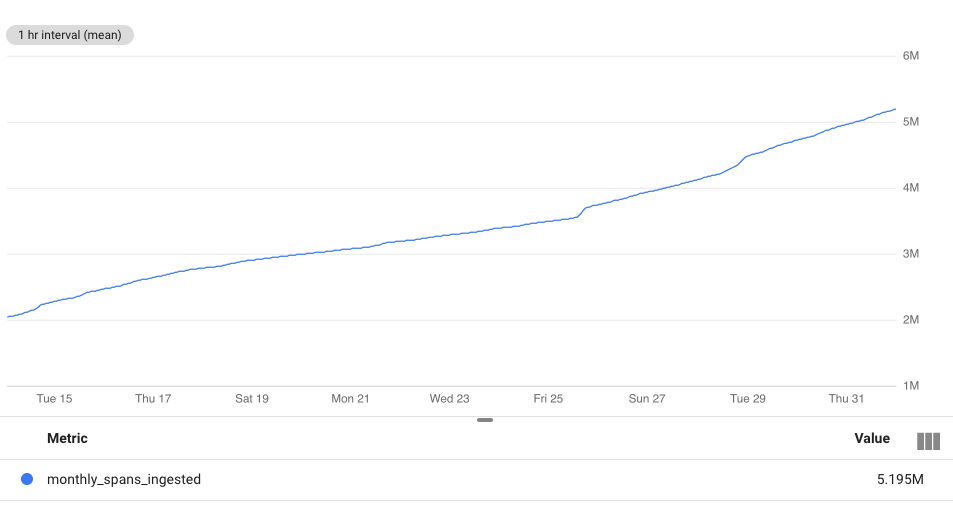 Cloud Functions are another great example of the free tier making your costs look deceptively low at the beginning of the month. This chart shows at what point the free tier for each SKU is exceeded. 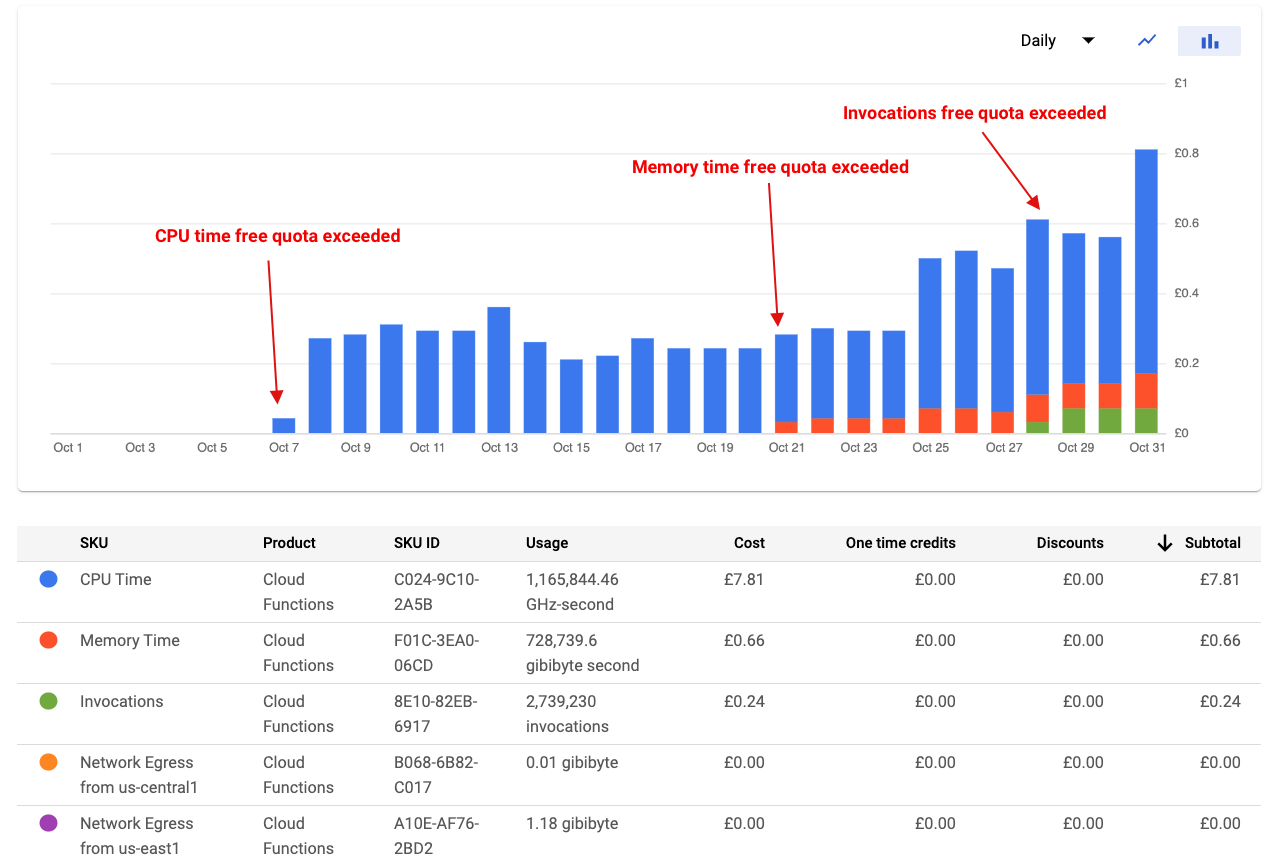 I’ve not been able to find a Stackdriver chart that shows the amount of CPU and memory time. But we can still take a look at the cost calculation.

All my functions use 512MB memory with an 800Mhz CPU allocation. On average it takes 0.5s to run a function, and there were 2.74M invocations in October.

The Stackdriver chart below shows how many Cloud Function invocations were made over a 2 day period. 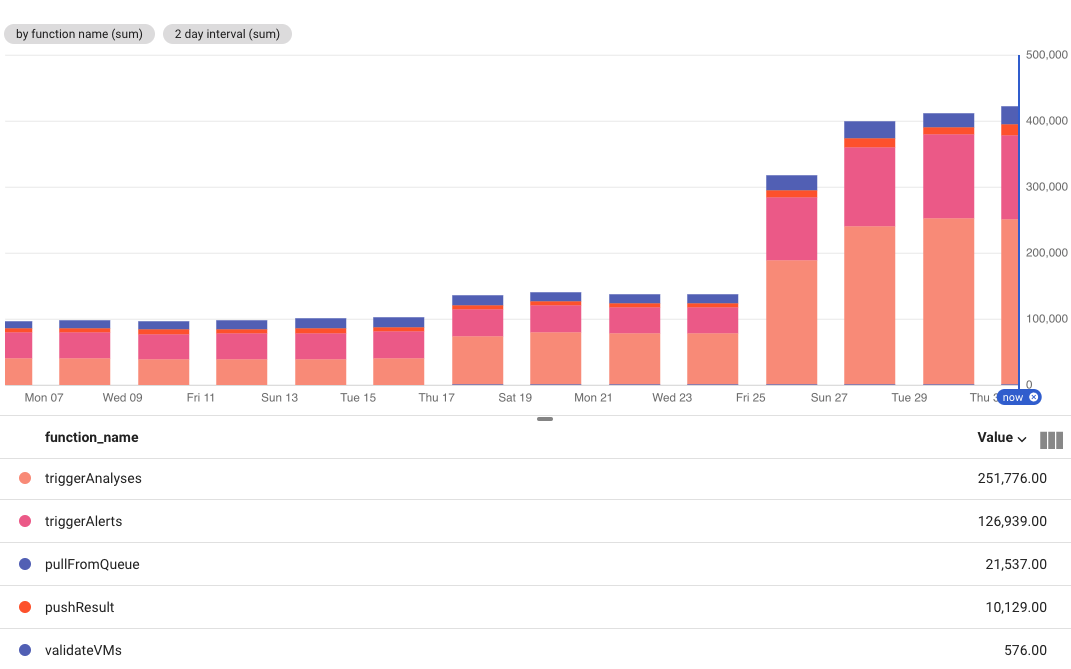 Breaking costs down by function name

I’ve not found an easy way to do this, but it’s possible with resource labeling and exporting billing data to BigQuery.

Once you’ve set that up you’ll be able to see detailed billing data in BigTable. You can run a query like this to tally up the costs for each function. 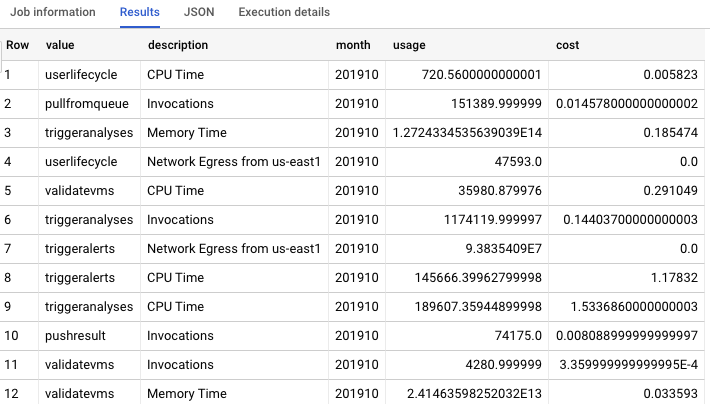 Then you can use that data to create a chart like this: 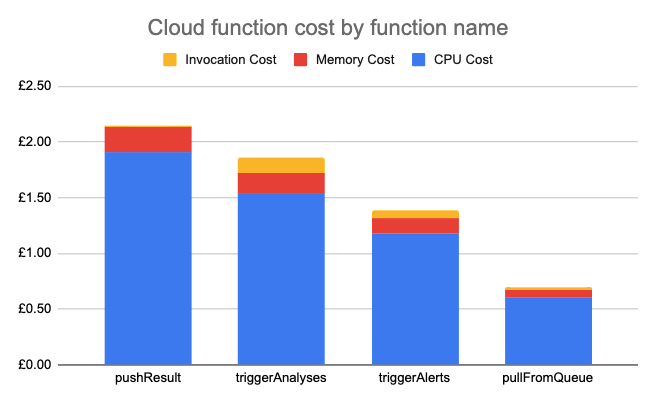 It’s not always easy to understand what exactly is going on. Use Stackdriver metrics to break down resource usage. If you can’t figure out what’s going on, try contacting technical support.

Google could make pricing more predictable and easier to understand by allowing customers to view their costs as if there was no free tier. It’s also often hard to figure out what an SKU really means, since there’s no direct link between the concepts described in the documentation and specific SKUs.